Get your high-quality 3D Scanning Services provided by us and executed by our hard-working professionals.

Get a free instant quote

In Coimbatore and Chennai, Rapid 3D provides leading quality measurement, 3D Modelling and 3D Scanning Services. Especially, we use advanced measuring equipment, resulting in very accurate, precise, and fully automated machinery.
As a leading provider of 3D scanning and 3D modelling service provider in Chennai & Coimbatore, we are trusted by the largest industrial partners. With decades of experience and knowledge, professionals perform their work efficiently. We provide our 3d Modelling & 3d Scanning Services at a high quality in terms of customer satisfaction.

Do You Want To Know the 3D Modeling Cost?

The standard file format used by 3D printers is STL, which can be exported from CAD designs or generated by 3D scanners. Where CAD files for an object don’t exist, objects can be accurately scanned to generate these files for further work in CAD or for directly printing out a 3D model. 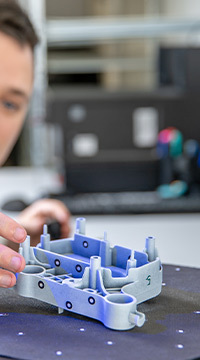 What is 3D Scanning?

3D scanning is a high-end technology which enables us to analyse an object in the real world. 3D scanning can be a faster easier technique to create 3D models for 3D printing. One of the beneficial facts about 3D Scanning is that you can save enough money and time at any point from design to production of a manufacturing process. You don’t have to be a 3D scanning expert or purchase your own equipment to benefit from this versatile technology—that’s where we come in. Partnering with Rapid 3D will make executing a successful project that much simpler.

What is 3D Modelling?

3D modelling is the three-dimensional representation of an object. A 3D object can convey an object’s size, shape, and texture. You can create 3D models of existing items, as well as designs that have not yet been built in real life. 3D models are mostly used for planning buildings, creating video games and movies, and conducting academic research. Our skilled project members in Rapid 3D technology are experts in 3D Modelling services and also have experience in the field of 3D modelling. We at Rapid3D Technology Service, look forward to a long-lasting partnership with all our clients.

How Our 3D Scanning Services Works?

Rapid 3D high-quality 3D scanning services in Coimbatore & Chennai at an affordable price. By projecting a pattern of light on an object and examining how it is distorted by the object’s shifting surface, 3D scanners can quickly record its shape and dimensions.

The scanner can be set up according to the kind of object the operator wants to capture. The object to be scanned can be mounted on a software-controlled turntable so that it can be scanned from several directions and the model views automatically assembled, saving time in post-processing. Other simple processes can be used for larger objects.

Meshes can also be used as a template for reverse engineering by generating an accurate representation of the object consisting of the surfaces and solids used by CAD software. In addition, our services are available in and around all regions near Coimbatore and Chennai.